Imagine a five-year-old boy with polio in left leg swimming against the current in a river. Yeap, that was my Dad. Those days, most kids were not vaccinated.

So Dad learnt independence pretty early in life, never expecting sympathy for his deformity. He grew up to be a man who never preached without practising. At home, he preferred to set examples, fun ones most of them. He is not the sort of father who would ask you to not steal while bribing government officials for some legal paper work. He is a man of actions, not words.

This list has lessons that he never really taught us consciously. He just lived those things.

My Dad resigned as a pastor (priest) of a mainstream church 19 years ago. That takes guts. Allow me to explain. In protestant Christian community, if you are a priest of that particular church, you are a big deal. His resigning meant we would be an outcast from the community, some of our friends would stop visiting us on Christmas, people wouldn’t want to marry their son or daughter to our family. Why risk all this? Because he felt like the church wasn’t the house of God anymore. It was the house of the gatekeepers of politics, corruption and indecency. When he continued to speak the truth, the “church officials” conspired against him. But he was mostly hurt because they had dishonoured his God. Resigning was the uncoolest thing to do back then. Some of our family friends and relatives ridiculed him. Little did I realise then that I was growing up in a world where “coolness quotient” determined people’s character. She doesn’t drink? How uncool! She has never had a one-night stand, how lame! Everyone looked for validation (read Facebook likes) on what they did. Today, when I stand for my own beliefs, value system or rules, I don’t blink an eye in making it clear to others. I am neither looking for their opinion on my coolness nor am I trying to value or undervalue people on their coolness.

Dad is an ardent lover of anything non-linear. So theories seldom came first. We were thrown directly into a Houston-we-have-a-problem situation. An instance – I would be upset because he didn’t like the dress I was wearing. His opinion mattered to me. He would let me solve this problem on my own. Finally he asked me – why do you care so much about what I think? Do you love it? Do you think you can carry it confidently? I learnt from some of these Daddy-daughter arguments that life’s pretty much like it. People will have their own opinion about what I do, why I do it or how I do it. But it’s only I who has lived that journey, who had to make that choice. Why and how would others understand my choices? Choices – good or bad – must be owned proudly. A friend asked me recently – what’s that one thing you would want to change about your life? And I said – nothing at all. Even some of my bad choices made me who I am today. They left with some valuable ‘dont’s’ afterall. 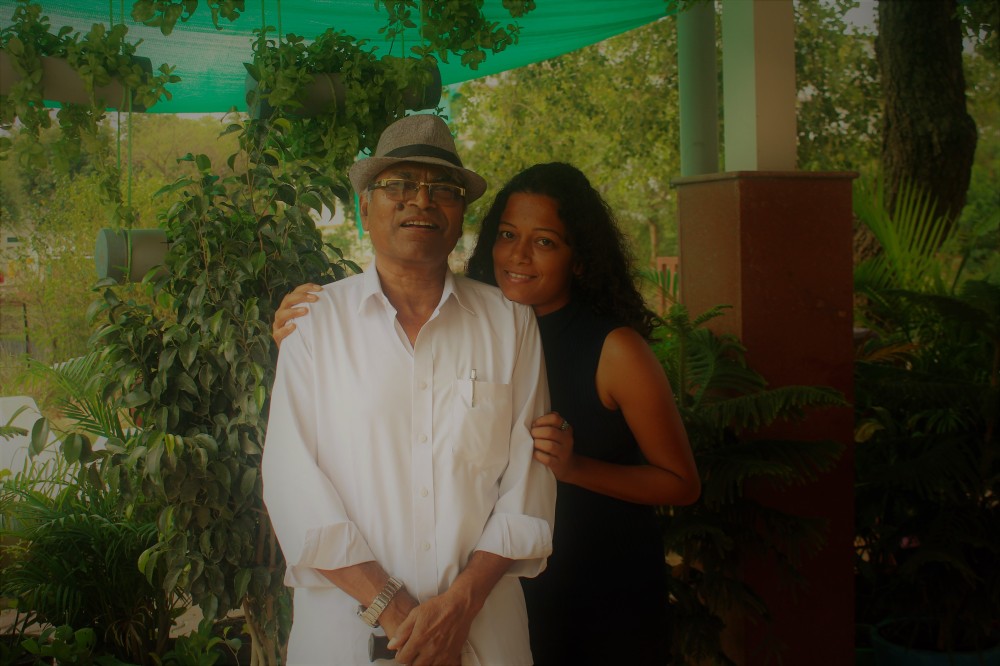 A related lesson to owning my choices was this – I couldn’t undo what I did or reverse the consequences of my choices. One of his many favourite Bible verses is – as you sow so shall you reap. His version – you can’t expect flowers after sowing thorns. Anything once done under the sun, cannot be undone. I have seen him evaluating his choices often. He was never ashamed to admit before my brother and me how a particular decision was bad or how some of his choices led to negative consequences and regret. I may be tempted to go with the flow today but I am aware that the smallest of my choices is making an impact right now  – good or bad.

My Dad is hard to please when it comes to prizes, achievements or grades. He often quotes the verse in the Bible – God sees the heart. This makes him more intention-focused than result-oriented. So he wouldn’t be mightily impressed by my English scores (which was never less than 95%) but would give me a bear hug on barely passing Math. Why? It was definitely not because of the whole engineering-exam fixation of the parents in the 80s. But because he knew I didn’t enjoy Math yet I sincerely worked hard to pass it. Getting highest marks in English was mostly to impress the rest of the class. I was already good in it. Sure enough my brother and I developed a habit of NEVER cheating in our entire school and college life. I learnt more from my efforts than victories or failures. And I have honestly seen my intentions affecting my happiness. What’s your real intention behind helping this guy? Why exactly did you take up that assignment? What’s your intention behind getting married? Intention is all that matters, bro.

This one I hate to admit but for Dad, any joke that has the ability to lift someone’s mood or bring a smile is a great joke. He can make Mom laugh almost instantly especially when she is mad at him. It’s his humour that keeps their marriage so fresh, so fun. And despite that I crib on his dumb Daddy jokes most of my Sundays, I have often laughed on them between my tears. I heartily appreciate people who can crack jokes instantly or can find humour in a weird situation. Most of all, I have come to laugh at myself and at the silly situations I keep getting myself into. That keeps life interesting.

Now that’s an annoying trait, bro. But Dad has a way of torturing himself mentally when something goes wrong. Before blaming anyone, he would first evaluate himself, his own decision or action. It’s only when he thinks his intention was pure before his living God, would he proceed to ask questions from anybody else. How has this helped me? The habit of introspection leaves me with a clear conscience and peace of mind even when it’s my fault. When I know I am wrong in a given situation, I also have the power to admit it and make amends. If it’s someone else’s fault, I have no control over it anyway. It’s truly helped me to move on in the most difficult of situations.

My Dad did go through a surgery when he was about 16 and now he could use calliper . So now he could walk while using a stick (not crutches any more). Did that make him invincible? Hardly.  He was diagnosed for blood pressure in his late 40s. And ever since, he made a commitment of fitness with his own body. He walks for about half an hour every single day. He believes in the Biblical principle – your body is the temple of God. I began to follow simple things like – taking stairs instead of lifts when I can, walking or swimming six days a week for an hour, watching what I eat and so on. Most of my friends think I defy my age.

It doesn’t mean I never argued or fought with him. As a teen, there were days I didn’t like my Dad so much because I didn’t understand a lot of his actions. Yet I kept observing and realised over the years why he chose what he chose. Today I am as thankful for his rebukes as I am grateful for his numerous hugs, his candid public appreciation of my talents, his wonderful story telling sessions and most of all – his friendship.

I would like to sum up with a quote by Clarence Budington Kelland: My father didn’t tell me how to live; he lived, and let me watch him do it.