She knew at once. She had touched the corner of his cloak in a swift movement. He had turned around, astonished.

A cool audacious breeze blew sand and brushed her curly tresses. Most people shielded their eyes. She caught the dance of the palm leaves above her. Yet her world had seized in that moment. His eyes moved in quick succession. She tightened her grip on the netted black veil that barely covered her nose and her scarlet lips. She started to turn but couldn’t resist. I must see him one last time. Amid a sea of faces, he found her acqua green eyes. He knew at last. He could see through her bare soul. 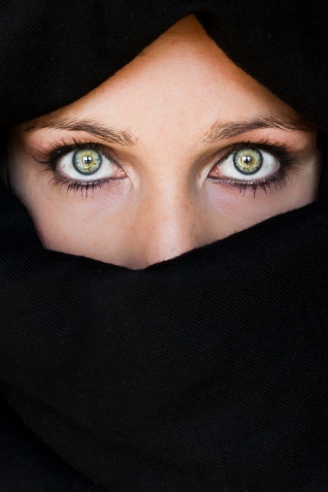 She was 21 when all the beauty in her world left her. Every single day since had she despised the wetness, the blood. The incessant flood of red liquid that often wet her under-clothes and made her eyes moist, dried her soul over the years. Yet her adolescent memories refused to mature.

She was 16 and beautiful. The scorching Arabian sun took delight in bathing her naked face, her arms. She often hopped about like a little bird on a pursuit to sing of hope and happiness. Her male playmates competed for her glance. She adorned her hair with joyous colours of green, pink, violet, yellow. How she loved wearing Red till it began to stain her every garment. Black became her protector.

Her eyes had made a cloaked stranger stop dead in his tracks. Her Innocence had triggered his lust. She had lost track of her time. Dusk wasn’t new to her, yet her instincts warned of a new nightmare. In her pursuit to find her way home, she had wandered far off. She began to run, leaving her leather foot straps behind. Her pursuer finally outran her. In a flash, she found herself lying on the cold ground. He caught her lower garment, triumphant in pleasure. And then he let go. He was staring on his hands now. The thick blood on his palm shone in his eyes. Her stain had dowsed his fire. He cursed her and disappeared.

She had sat there all night curled up on the deserted street. She had felt ugly, dirty. It was the most intimate, soul-crushing sorrow. At dawn, Her mother found her. It was Nazareth.

He was called Nazarene. And today cursed for it. One of them ate from his table and betrayed him. Another who once followed him, now denied him. They had shouted Hallelujah from the same lips that spat on him today. She waited. If only she could smell his sweat from across the street or touch his torn garment one last time. And he did come wearing blood and flesh. She ran, opening the jar of water as she bent. He drank, never leaving her eyes. She saw them flowing in love still. She dreaded caressing his face for fear of wet red streams. But the crown of thorns unshackled the flood of her heart. She poured water on him and began to wash his stained, dirty cloak. They were her stains once.

It felt like yesterday when she had touched it for the first time. Just a shivering touch, and the power had left his body to dwell in hers. She was redeemed, made well of her pain. “Who was it that touched my cloak?”, he had asked. She had found her hands raise up in the air on his command. He loved her from the time she was conceived.

“Daughter your faith has made you well. Go in peace.”

Someone thrust her aside. She fell on her knees. A tiny piece of his cloak remained in her hand. “Fret not my daughter, I make all things new!” He lifted up the cross, stumbling. The colour that she had feared  for so many years redeemed her soul today. She saw him taking away her burden, her sins. She knew she was forgiven.

NOTE: This story is based on a passage from the Bible in Mark 5:25-34, commonly known as The Bleeding woman . It is an amazing tale of a woman who had an incessant blood discharge for 12 years. She had such faith that she believed that only if she could touch Jesus’ cloak, she would be healed. And yes, she was healed. It is the true story of faith and forgiveness given in The Bible.

Do check the video in the comments section that talks about the message of the Cross and Good Friday.